A punt per entrar i sortir de l'Escola: amb la motxilla a l'esquena! 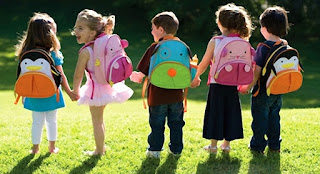 Publicat per Gràcia a 8:03 Cap comentari: 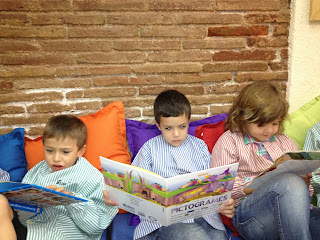 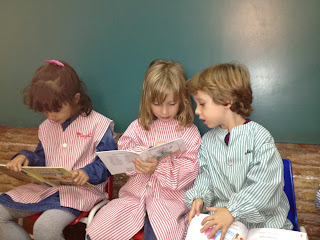 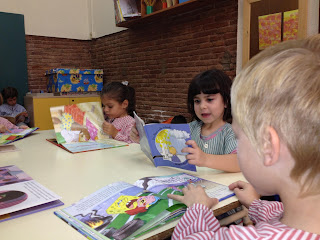 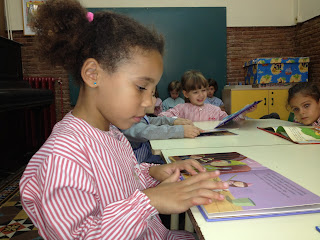 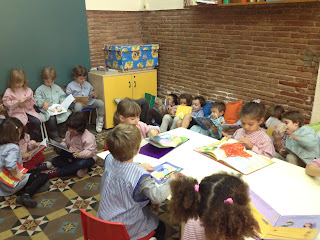 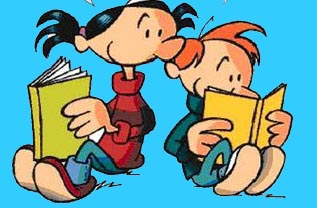 Publicat per Gràcia a 8:21 Cap comentari:

Nowadays Halloween is becoming more celebrated around the world, not only in UK and USA. Do you want to know something more about this festivity?


HISTORY AND CUSTOMS OF HALLOWEEN
Most holidays commemorate or celebrate something. But what  about Halloween? What is Halloween actually a celebration of? And how did this peculiar custom originate? Is it, as some claim, a kind of demon worship? Or is it just a harmless vestige of some ancient pagan ritual where folks get together for parties, dress up in Halloween costumes and bob for apples?
The word itself, "Halloween," actually has its origins in the Catholic Church. It comes from a contracted corruption of All Hallows Eve. November 1, "All Hollows Day" (or "All Saints Day"), is a Catholic day of observance in honor of saints. But, in the 5th century BC, in Celtic Ireland, summer officially ended on October 31. The holiday was called Samhain, the Celtic New year.
Samhain is the time of year when Pagans believe the veil between the world of the living and the world of the dead is the thinnest.
In ancient Ireland, one story says that on Samhain the disembodied spirits of all those who had died throughout the preceding year would come back in search of living bodies to possess for the next year. It was believed to be their only hope for the afterlife. The Celts believed all laws of space and time were suspended during this time, allowing the spirit world to intermingle with the living.
Naturally, the still-living did not want to be possessed. So on the night of October 31, villagers would extinguish the fires in their homes, to make them cold and undesirable. They would then dress up in all manner of ghoulish outfits, being as destructive as possible in order to frighten away spirits looking for bodies to possess.
The Romans adopted the Celtic practices as their own. But in the first century AD, Samhain was assimilated into celebrations of some of the other Roman traditions that took place in October, such as their day to honor Pomona, the Roman goddess of fruit and trees. The symbol of Pomona is the apple, which might explain the origin of our modern tradition of bobbing for apples on Halloween.
The thrust of the practices also changed over time to become more ritualized. As belief in spirit possession waned, the practice of dressing up like hobgoblins, ghosts, and witches took on a more ceremonial role.
The custom of Halloween was brought to America in the 1840's by Irish immigrants fleeing their country's potato famine. At that time, the favorite pranks in New England included tipping over outhouses and unhinging fence gates.
Trick or Treat
The custom of trick-or-treat is thought to have originated not with the Irish Celts, but with a ninth-century European custom called souling. On November 2, All Souls Day, early Christians would walk from village to village begging for "soul cakes," made out of square pieces of bread with currants. The more soul cakes the beggars would receive, the more prayers they would promise to say on behalf of the dead relatives of the donors. At the time, it was believed that the dead remained in limbo for a time after death, and that prayer, even by strangers, could expedite a soul's passage to heaven.
Jack-o-Lantern
The Jack-o-lantern custom probably comes from Irish folklore. As the tale is told, a man named Jack, who was notorious as a drunkard and trickster, tricked Satan into climbing a tree. Jack then carved an image of a cross in the tree's trunk, trapping the devil up the tree. Jack made a deal with the devil that, if he would never tempt him again, he would promise to let him down the tree.
According to the folk tale, after Jack died, he was denied entrance to Heaven because of his evil ways, but he was also denied access to Hell because he had tricked the devil. Instead, the devil gave him a single ember to light his way through the frigid darkness. The ember was placed inside a hollowed-out turnip to keep it glowing longer.
The Irish used turnips as their "Jack's lanterns" originally. But when the immigrants came to America, they turned to hollowed-out pumpkins lit with an ember.
Ghost Stories
Telling ghost stories has been a tradition of Halloween for a long time. The first ghost stories, however, were not associated with Samhain. In the first century CE, the Roman author and statesman Pliny the Younger authored one of the first ghost stories in his letters, which became famous for their vivid account of life during the heyday of the Roman Empire. Pliny reported that the specter of an old man with a long beard, rattling chains, was haunting his house in Athens. The Greek writer Lucian and Pliny's fellow Roman Plautus also wrote memorable ghost stories.
Then in 856 CE, the first poltergeist, which is a ghost that causes physical disturbances such as loud noises or objects falling or being thrown around, (literally, "noisy spirit") was reported at a farmhouse in Germany. The poltergeist tormented the family living there by throwing stones and starting fires, among other things.
Last week, boys and girls from 3rd of E.I. learned some things about Halloween, but provably the most important for them was the tradition of Trick or Treat, (sweets and sweets for everybody!!), and they enjoyed a lot making chocolate lollipops... 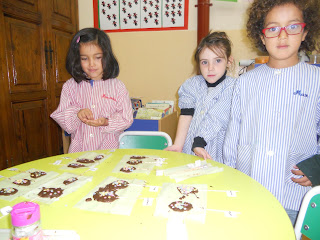 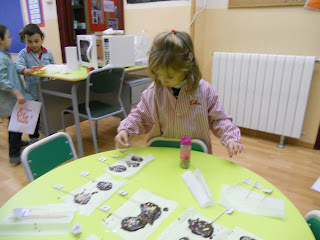 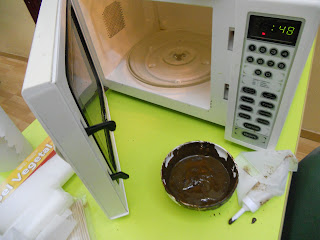 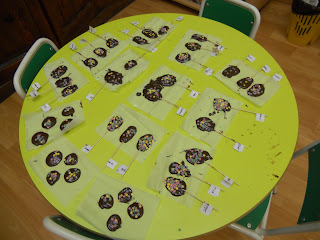 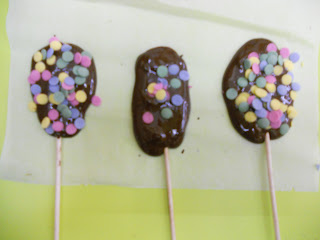 Publicat per mercè a 13:04 Cap comentari: 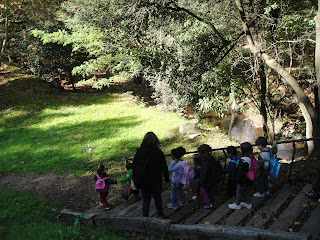 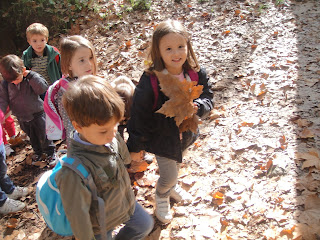 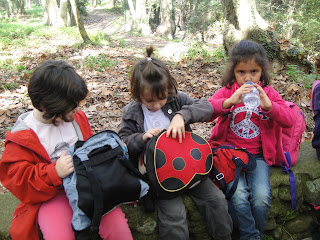 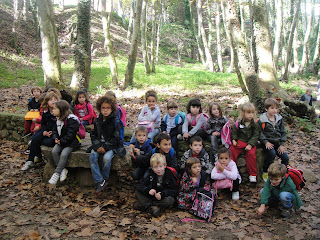 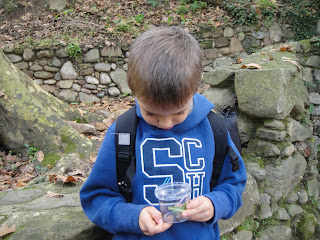 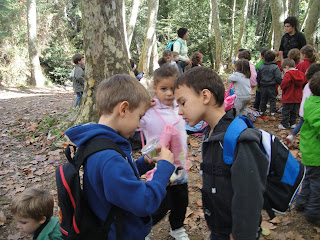 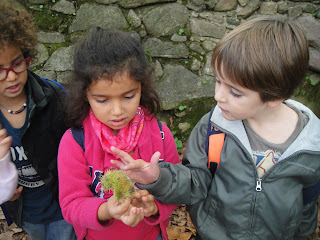 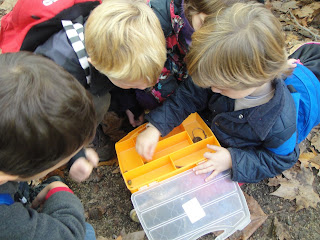 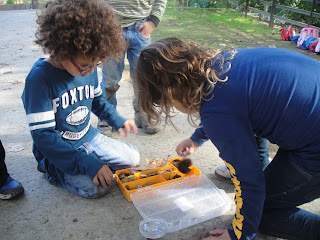 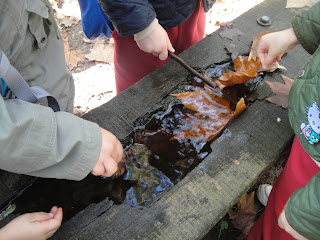 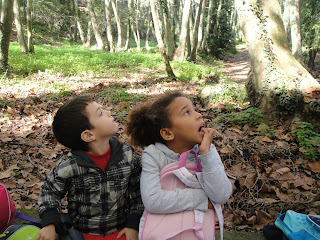